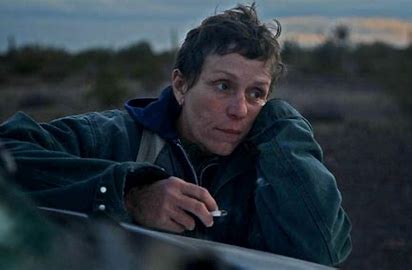 There are movies that feel slow and plodding and you sit there wondering when the hell something is going to happen.

Then you have the movies that are slow and plodding but somehow manage to pull you in. Maybe you don’t LOVE the movie but you admire and respect it immensely for what it is trying to do.

So, that brings me to NOMADLAND: the new movie written and directed by Chloe Zhao.

When one often thinks of the Oscars as an award ceremony over the years, there is often a sense that people feel they honor films that the general public doesn’t like or manage to ride a middle ground between being too safe or too boring.

They also love their epics which used to sweep various ceremonies with such ease that many people instantly grew to hate these films for beating out more popular films in the process such as:

OUT OF AFRICA beating THE COLOR PURPLE and WITNESS

Yeah, you get the idea.

When looking at this list, you notice these films are not only epic in scope but have rather long run times. The Academy built up a reputation for honoring overly long epics that ranged from being stuffy to sanctimonious to overwrought.

NOMADLAND is fascinating in that it is only an hour and 40 minutes long and yet it feels just as epic in some ways if not more so strictly due to the topic it tackles and how beautifully it is helmed/shot. If NOMADLAND were to win the Oscar, it would be the 11th shortest Best Picture winner…but it would also feel like an extremely unique winner as well.

Chloe Zhao’s movie is inspired by the non-fiction book NOMADLAND: SURVIVING AMERICA IN THE 21ST CENTURY by Jessica Bruder and in the film, we see this world through the eyes of the character of Fern, played by Frances McDormand who also co-produces the film.

As the film begins, we get a caption that lets gives us a brief backstory. We learn that in 2011, a sheet rock plant in Empire, NV is forced to shut down following the residual effects of the 2008 recession. Fern, along with her now deceased husband, worked at the plant for years.

Instead of looking to retire early or maintain any kind of stability that would seem normal to most people, she sells all of her belongings and abandons most of her regular life to be a nomad/van-dweller. She lives out of her van and works odd jobs around the west coast, primarily doing seasonal work at an Amazon plant which provides her with her biggest paychecks all year.

New to the scene, we basically watch Fern interact with people in the community while she learns the ropes…and this is where the film is quite remarkable because you could say the movie feels incredibly real. At moments, it does feel like you are watching a documentary that happens to have extraordinary cinematography and a lot of that feeling comes from the fact that Zhao cast real-life nomads playing fictionalized versions of themselves.

Characters like Linda May, Bob Wells, and Swankie are actual people who live this lifestyle and it gives the movie a special feeling that I don’t think it would’ve had if they hired professional actors. The film does have one other well known actor in the mix though, which is David Strathairn, who plays a character named Dave….and to further add to what I mentioned earlier, the nomads all keep their real-life names….only McDormand gets a completely new name.

Strathairn’s Dave is the closest thing this movie has to what could be considered a typical movie trope: a potential love interest. However, how the movie ends up handling him is pretty appropriate to the kind of film that Zhao wants to make.

For a movie like this, I feel like McDormand was the only real choice (of known actresses) to play Fern. With her history as being one of the finest character actresses in Theatre and Film and, to a lesser extent, Television, McDormand has always been attracted to roles of strong but vulnerable women with a working class background such as NORTH COUNTRY, her Oscar winning role in THREE BILLBOARDS OUTSIDE EBBING MISSOURI, or her Tony Award winning role in David Lindsay-Abaire’s GOOD PEOPLE.

People tend to forget that McDormand came from a classically trained acting background at Yale where she received her MFA and she began her career in the theatre playing everything from Shakespeare to Odets to Tennessee Williams. With films, she found her niche when she got drawn into the world of the Coen Brothers (soon after marrying Joel) who gave her fantastic roles in BLOOD SIMPLE, RAISING ARIZONA, and the piece de resistance, FARGO. She even now has been lumped into the ensemble of actors frequently cast by Wes Anderson which is a great company to be in for sure.

McDormand is not a “loud” actress. She has always been pretty restrained and keeps a certain top on her emotional outbursts in films. Even in THREE BILLBOARDS, she expertly only uses one key moment to go bold and yet, it makes her seem all the more powerful.

Her take on Fern is no surprise. This is a deceptively brilliant performance because it is so real and honest…just like Paul Raci in this year’s SOUND OF METAL. McDormand is simply living this role and she gives it a subtle passion that is nothing short of beautiful. While my personal vote for Actress would still go to Carey Mulligan for PROMISING YOUNG WOMAN (as of now at least), I can’t deny that I would also fully support McDormand winning her THIRD Oscar for this role. Such a win would put her into a small group of actors who managed to win three acting Oscars: Walter Brennan, Ingrid Bergman, Jack Nicholson, Meryl Streep, and Daniel Day-Lewis (Katharine Hepburn has four which still remains the record to date). To add the accomplishment, she would have three Leading wins which would set her apart from Bergman and Streep (who each had a single Supporting win) and put her on a path to catch up to Hepburn. She may not pull it off this year but I could see her winning another Oscar before her career is over.

When I posted on Facebook that I watched NOMADLAND last night, I said the following:

“I feel like it’s hard to say anything about NOMADLAND. I don’t mean that in a bad way, but it is simply one of those movies that needs to be experienced”.

I have said more about it now, of course, but I do feel that it is a film that will end up potentially alienating some due to its rather meandering nature or due to the fact that it doesn’t even really have much of a plot…and yet, that is sort of what makes it work. The movie feels so real and it is destined to speak to many…and for some to doubt its potential appeal to a bigger audience despite its slower nature, it DID win the People’s Choice Award at the Toronto Film Festival which is a major win on the film’s part in solidifying it as a serious Oscar contender.

Do I love NOMADLAND? At this very exact moment, I can’t really say I do. It is like I said at the beginning of this review…I respect and admire the movie for everything it does and how it does but I also don’t see myself returning to it anytime soon. Who knows though….maybe in a few years, I will look back on this and think I was crazy for not saying I “love” it but I simply cannot fault the praise that the film is getting.